Minister Szijjártó addressed to the representatives of the DC Member States, observers and guests during the Danube Commission´s 93rd session. He pointed out that the Danube is a matter of emotion, history and national identity, on the one hand, and a matter of common asset, energy and water resource with a major role for tourism, economy and agriculture, on the other hand. 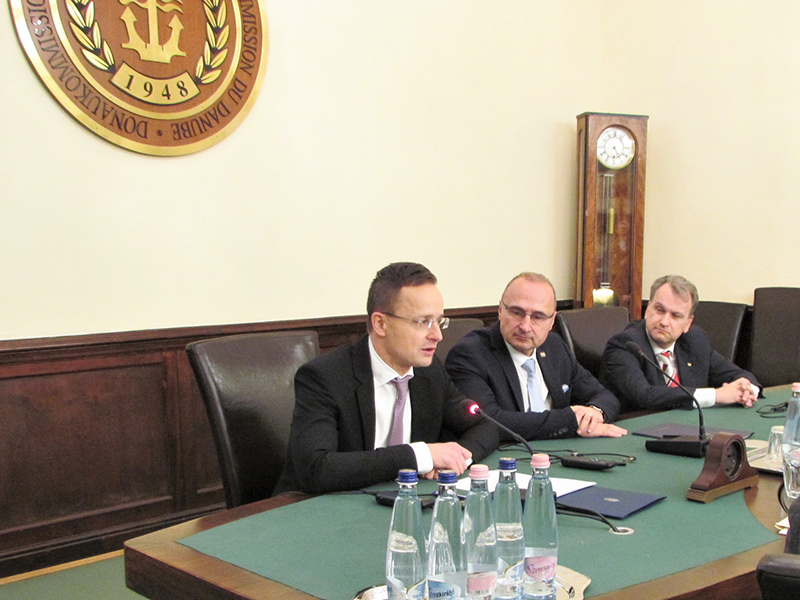 The Danube is important for Hungary and for the entire Central Europe as well. This importance is also reflected in the EU Strategy for the Danube Region (EUSDR) which is one of 4 regionally dedicated macro strategies of the European Union.

Minister Szijjártó mentioned that the Danube Commission is the only international organization with headquarter in Budapest since 1954, and that it was an honor for the Hungarian Ministry of Foreign Affairs and Trade to celebrate in 2018 70 years of DC by hosting an exhibition and publishing an anniversary publication.

When the Convention regarding the regime of navigation on the Danube which governs the work of the Danube Commission was concluded in Belgrade, in the year 1948, the main challenges were different from the current ones. At that time, it was a necessity to reconstruct the bombed bridges, to relaunch the navigation and to reorganize the transport connections between the countries. Nowadays, the 11 Member States of the Danube Commission have to consider their cooperation in a much wider scope than just the freedom of navigation.

Minister Szijjártó underlined the need to speak about the renewal of the Danube Commission and the modernisation of the Convention which was signed in 1948. The Hungarian side is honored to hold the chairmanship of the working group for the revision of the Belgrade Convention which is supposed to prepare the diplomatic conference to amend the Belgrade Convention and encourages the common work in order to come to a conclusion about the renewal of the said Convention.

Within the framework of the Danube Commission the Member States should stronger and more affective coordinate their domestic navigation programs and regulations, because this could generate quicker and environmentally friendly transportation on the river which will serve the interests of all countries.

The European Union Strategy for the Danube Region helps to launch common projects through which the riparian countries can develop together and build common success stories, taking into account the fact that Danube region is a good example for connectivity and cooperation. Thus, it is timely to put the Danube Region Strategy on a modern and common sense-based approach to further strengthen the Central European cooperation and the role of the Danube Commission.